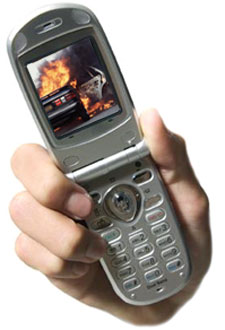 Cellular phones have helped to speed up responses to car accidents and other incidents where no phones are available. There are some important things to remember about cell phones when calling 911.

1) Cellular phones do not provide the same E911 data that regular wired phones do. This means that we do not know your name, telephone number and most importantly your location. If you do not know where you are, we will ask questions such as where you are going, what road you are on, where and when you left, and any landmarks you see around you. This takes time and still may not get us a correct location. It is imperative that you know where you are at when traveling, so watch for mileposts and other signs along the way.

2) Cellular 911 calls do not use the same routing that regular phones do, so there is no guarantee that your call will go the correct PSAP. It is not uncommon to receive calls from neighboring counties. In fact, we have received calls from over a hundred miles away and even from other states.

3) Another problem that we see is accidental calls from cellular phones. Many phones have a 911 shortcut programmed, usually activated by pressing and holding the 9 button. This is great for emergencies, but becomes a problem when the button gets pushed while in a back pocket, on the seat of the car, or in a purse. Most cellular phones have a “key lock” function that prevents accidental calls.

The FCC has mandated certain information be transmitted from cellular phones to PSAPs, called Phase I and Phase II technology. Phase I includes a phone number and the tower that is transmitting the signal. Phase II requires cellular phone subscriber information and an exact location when 911 is called. Both of the deadlines for these rules have passed, however implementation has been stalled by cellular phone companies.